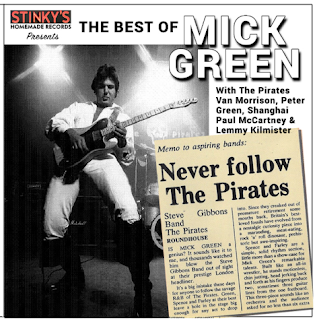 Mick Green joined Johnny Kidd & The Pirates in 1962. His innovative style was credited as an inspiration by Pete Townsend, Wilko Johnson and many others. One of his compositions ("Going Back Home") became a signature song for Dr. Feelgood. The Guardian called him "the original British guitar hero".
After Johnny Kidd died in 1966, Mick Green became a member of Billy J. Kramer and the Dakotas (cowriting the b-side of their "Trains And Boats And Planes" single). He then spent seven years touring with Englebert Humperdinck. In the early 70's, Green led a band called Shanghai. As pub rock gave way to punk rock, he reformed The Pirates. He also released a solo album in 1986 called Painkiller. In 1990, Green recorded a single with Lemmy (another Pirates fan, who had covered "Please Don't Touch" on the Motorhead/Girlschool single). Also in 1990, Green played lead guitar on Robert Plant's version of "Let's Have A Party".

Mick Green performed with Paul McCartney during the 1988 Russian concert and 1999's Live At The Cavern Club, and he played on McCartney's Run Devil Run LP. Green played and recorded with Van Morrison for a decade, starting with Back On Top (1999). He toured extensively with Bryan Ferry, and recorded with Ronnie Lane & Steve Marriott as well as British blues great Peter Green.

Please enjoy Stinky's tribute to the penultimate Pirate, a master of the Telecaster -- Mick Green.