After getting the idea to compile songs from reunion albums, I found two articles from Stereogum (here and here) and two lists from Rate Your Music (here and here) of individuals and bands who made musical comebacks.
I excluded solo acts (it isn't a reunion if there's only one performer) and reunions that did not result in new original songs (so Big Star qualifies, but the Box Tops don't).
For many bands, years may pass without new releases, so for the purpose of this series, a comeback is considered a gap of at least a decade between albums.
Reunions that do not include all the original band members are not excluded. For example, Robert Forster and Grant McLennan released a Go-Betweens album in 2000 with Sam Coomes and Janet Weiss from Quasi. Stephen Burns was lured by Alex Chilton from Memphis to Glasgow, where Burns recruited a new lineup and dubbed them The Scruffs.
The year 2000 saw comebacks by 23 Skidoo and one of my favorite hardcore bands, Secret Hate. In 2001, The Blake Babies, The Chameleons, The Dictators, The Electric Prunes, The Free Design, and The Go-Go's made comeback albums.
2002 was a banner year for reunions: The Band Of Holy Joy, The Breeders, The Carpettes, Crispy Ambulance, Dag Nasty, Discharge, The Flatlanders, Hanoi Rocks, The Remains, Sad Lovers & Giants, The Scruffs, The Soft Boys, Soft Cell, Suicide, and Wire. Hey, we featured The Flatlanders right here on this blog when Jimmie Dale, Joe, and Butch got together again 20 years later!
35 years passed between albums for The Remains, 33 for The Electric Prunes, and almost 30 for The Flatlanders and The Free Design. Today's compilation contains no Flatlanders, Free Design, Hanoi Rocks or Soft Cell. But it does include 20 great songs that I hope you will enjoy.
Posted by jonder 5 comments: 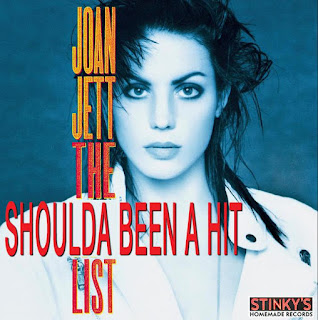 Continuing our coverage of one of the world's greatest living rock stars, here's a contribution from Stinky to complement my earlier Jett sets.

The Shoulda Been A Hit List compiles some of Joan's collaborations (with Bikini Kill, The Gits, L7, Wanda Jackson, Paul Westerberg, and others), as well as bonus tracks, b-sides and live cuts from the mighty Blackhearts.

Songs That Joan Jett Taught Us and Joan Jett's Jukebox went over well with readers, and that should have come as no surprise. Joan's music and her iconic image haven't lost any appeal over the past 40+ years. Who else could rock stadiums all summer long (starting next month on her tour with Poison, Motley Crue and Def Leppard) while being embraced by Kathleen Hanna, Laura Jane Grace and Miley Cyrus? Who else could fill in for both the world famous Kurt Cobain and the underground icon Mia Zapata?

The other day I saw a story about Joan's friendship with Mike Tyson. Today I read Trombone Shorty singing her praises: she joined him onstage last weekend at the New Orleans Jazz Festival, and she lent him the original tracks from "Bad Reputation" to play with for a new ad campaign.  My online activity may be monitored more closely than I realized, but these stories show the breadth of Joan's popularity, and her generosity of spirit.

Speaking of generosity, you can help fund The Embarrassment documentary! The Kickstarter deadline is May 25th. 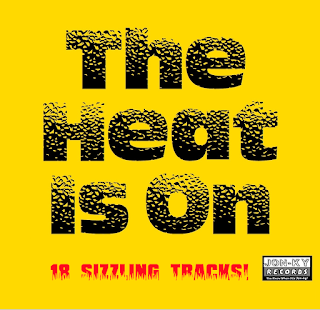 Stinky had a tropical brainstorm, and with the artistic expertise of RockAndre (homemade CD cover artist extraordinaire), our third Jon-Ky Records release turned out even better than Stinky and I could have anticipated.

During a fever dream of record hunting in the asphalt jungle, Stinky began to notice an alarming number of singles and albums titled "The Heat Is On".

At first, he thought he had uncovered an elite conspiracy to launder money for the Laurel Canyon lizard people: funding their insatiable appetite for adenochrome through Glenn Frey royalty checks.

Further research revealed that many of the songs had nothing to do with the evil Eagle's earworm from the Beverly Hills Cop soundtrack. The reality was far more extensive than we had suspected. The heat was on and rising, and not just on the streets.  It had spread from Atlantic to Pacific, from the US and UK to Jamaica, Austria, Scandinavia, and Saigon.

Jon-Ky Records has selected 18 specimens of incontrovertible evidence which we present to you, the jukebox jury: The Heat Is On. 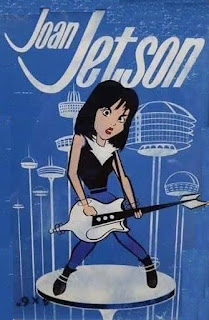 Listening to Joan Jett's version of "Hide & Seek", several thoughts came to mind. First, the song is hilarious. Second, Joan's got a great voice, and terrific taste in covers. Why not compile her cover songs, plus the originals?

Some of the songs (especially the ones she recorded on The Hit List) are quite well known, and it seemed unnecessary to include all of them. I settled on a single set of Songs That Joan Jett Taught Us.

There were more than enough cover songs for two CD-length volumes. A few covers appear as "bonus tracks" on Songs That Joan Jett Taught Us.

It's a short leap from bubblegum to glam, from Kasenetz & Katz to Chinn & Chapman. It's not much farther from "Can The Can" and "Funny Funny" back to the simple pleasures of "Hanky Panky" and "Wooly Bully". 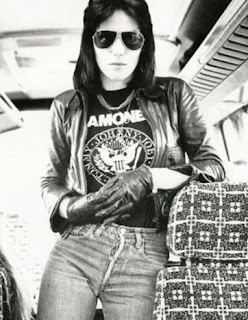 Maybe it was Laguna and Cordell who brought her The Belmonts, The Halos, The Zephyrs, Bunker Hill and Gary U.S. Bonds. Maybe Joan heard them as a child, or was influenced by the glam bands that drew inspiration from the 50's and early 60's (like The Rubettes, Wizzard, and Showaddywaddy). Regardless of who chose them, they're great songs (both the originals and Joan's versions).

Joan Jett And The Blackhearts' newest release (which came out last month) is the acoustic Changeup. Joan remains popular with generations of listeners, from stadium rock audiences to riot grrrls. She's done everything from fronting Evil Stig and Nirvana to performing in Rocky Horror on Broadway.

Email ThisBlogThis!Share to TwitterShare to FacebookShare to Pinterest
Labels: Joan Jett, Songs Someone Taught Us

Bovell Out Of Control 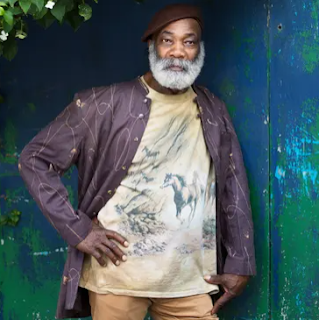 Dennis Bovell's legendary work with The Slits, The Pop Group, and Linton Kwesi Johnson (as well as the dub LPs he recorded under the Blackbeard name) are probably what endeared him to younger generations of rock musicians. Bovell has been an unlikely collaborator for Arcade Fire, Joss Stone, Jarvis Cocker, Boy George, and The Beta Band's Steve Mason (the Mason/Bovell album Ghosts Outside is highly recommended, and Dennis recently said that he "loved making this album".)

The Pop Group's second reunion record, Honeymoon On Mars (2018), was mostly produced by Bovell (three tracks were produced by Hank Shocklee of The Bomb Squad). For the 40th anniversary of The Pop Group's 1979 debut album, Bovell remixed Y (later released as Alien Blood), and last year we were treated to Y In Dub, a new deconstruction of the original tracks. 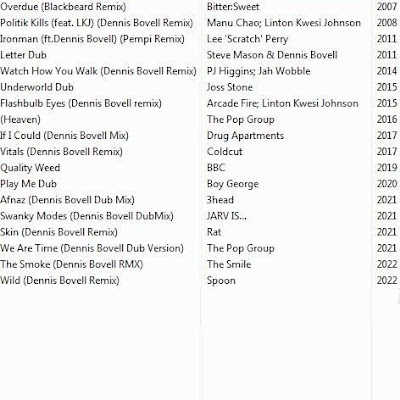 I compiled some of the Dubmaster's adventures in the 21st Century for today's set, Bovell Out Of Control. Don't miss Dennis' own Bandcamp page, which features a wealth of his music, both new and old. 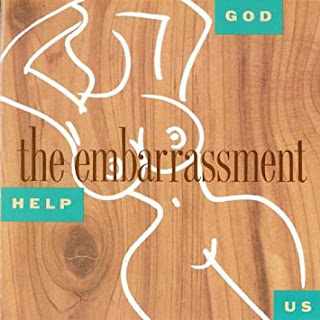 Starting a new series to feature bands that got back together (in whole or in part) and made new music. It happens all the time these days. In the first three months of this year, new releases were announced by Hoodoo Gurus, The Boo Radleys, Urge Overkill, The Rave-Ups, and Tears For Fears.

But let's go back to the 1990's, when reunions were less frequent and perhaps more remarkable. The self-titled album that Television made in 1992 and Buzzcocks' Trade Test Transmissions (1993) still hold up well. The reunions of The Raincoats, Bush Tetras, and The Clean also produced some great music. Blondie, Madness, Theatre of Hate, and The Knack got in on the comeback act, as did several artists whose heyday was in the 1960's.

The Band made a respectable return, and proved they could write without Robbie. The Creation's Power Surge showed them in fine form (especially guitarist Eddie Phillips), and both Phil May and Dick Taylor sounded as vital as ever on the Pretty Things' Rage Before Beauty. Slapp Happy made a charming new album, and Simeon from Silver Apples recorded with Steve Albini.

There's a lot of power pop here: 20/20, The Plimsouls, The Records (John Wicks without Will Burch), and The Rubinoos (who reunited again in 2019, as featured elsewhere in this blog). Scritti Politti (Green and David Gamson) made a new album that ranged from power pop to hip hop.

To paraphrase Monsieur Gartside, it's très jolie to see bonhomie replace animosité among formerly estranged band members, and to hear them collaborate on new music.  Not featured in this compilation (but also noteworthy) were the return in the 1990's of Scott Walker, Terry Callier, John Foxx, Faust, The Deviants, and hip hop pioneers Grandmaster Flash and The Treacherous Three.

The original lineup of Kiss and a couple members of Eddie & The Hot Rods also made new records in the 90's. I don't know how Kiss fans feel about Psycho Circus, but the Hot Rods' album Gasoline Days was savaged by AllMusic.  The Specials and The Box Tops got back together in the 90's, but the albums they made were all cover songs. [Edit: just remembered the Velvet Underground reunion in MCMXCIII.]

The reunion album closest to my heart from this decade is God Help Us by The Embarrassment, so I was excited to see the recent announcement that an Embos documentary called We Were Famous, You Don't Remember will be released this year.  Dan Fetherston of The Oxford Collapse started filming it during The Embarrassment's second reunion in 2006, but it took another 15 years to bring the project to completion (with co-director Danny Szlauderbach). Last year, Last Laugh Records reissued The Embarrassment EP and Death Travels West on vinyl, cassette and digital formats. 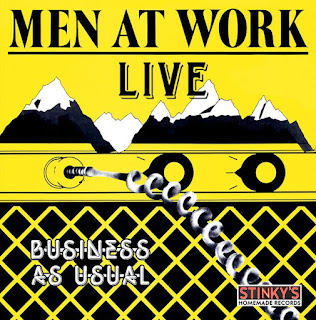 Men At Work did a brisk business worldwide in the early 80's. Their first album was released in October 1981 in their native Australia (the same month as the penultimate Police album, Ghost In The Latrine).  Six months later, Business As Usual got a worldwide release, and its singles "Who Can It Be Now?" and "Down Under" became #1 hits.

Comparisons to The Police are inevitable, both for the "pop reggae" sound of their music and the similarities of their singers' voices. Both bands split up in 1986; both singers began solo careers, as well as acting in films and TV.  Another similarity: Stewart Copeland and Sting once came to blows, but Men At Work cofounder Ron Strykert was arrested for threatening to kill frontman Colin Hay.

This month, Colin Hay released his 15th solo album, Now And The Evermore. Meanwhile, Stinky has compiled another Homemade Live Album that recreates Business As Usual. Bonus tracks include b-sides (such as the original studio version of "Down Under") and a live version of their 1983 hit "It's A Mistake".